I realized this weekend that I am incredibly behind on my “Make America Read Again” posts. I have read for about 25 states, yet haven’t reviewed most of them. Mea culpa, y’all! Balancing work and play isn’t always easy, especially when you’re spending the month of October on the whole30 diet and your whole life is meal prep and clean up and label reading…but that’s for another post.  Let me start to catch up by reviewing two more Mid-west state books for Ohio and Illinois! 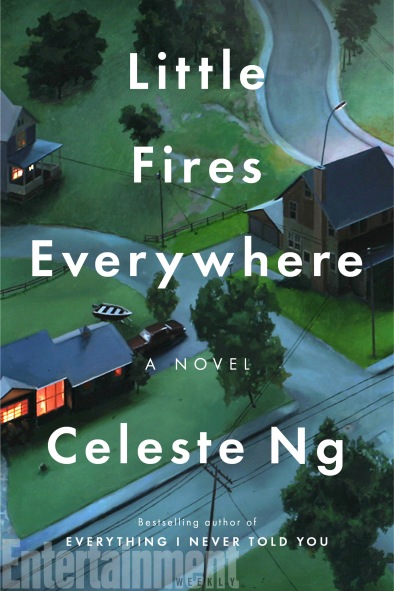 Celeste Ng is a powerhouse author who had a blockbuster hit, Everything I Never Told You, a few years ago. She is known for her deep character studies of family life in suburban cities, often plays with issues of race and/or immigration, as well as the hidden, unique dramas all people have in the privacy of their cookie cutter homes.

Her latest book, Little Fires Everywhere, was released on September 12 and seems to be another family drama smash hit. Set in the planned community of Shaker Heights, Ohio, this story opens with a house that has been burnt down, and then flashes back to the events leading up to the arson. It seems the main story centers around the children from two families – the Richardsons, who thrive on order and rules, and the mom-and-daughter duo Warren family, who rent their house from the Richardsons and embrace a more bohemian lifestyle.

The four Richardson children are all fascinated with Mia Warren and her teenage daughter Pearl – of their bemusing art projects, of Mia’s combination of odd jobs and creative endeavors, of Pearl’s thrift shop threads and Mia’s mysterious past, of their gypsy living style. Conversely, Pearl is attracted to the privileged stability of the Richardson’s home – their morning rituals, their spring break ski trips, their clean houses and weekly schedules.

This unlikely friendship between two families is threatened when a third family (who are friends with the Richardsons) attempts to adopt a Chinese-American baby from an unsuspecting single mother, and Mia and Mrs. Richardson take opposing sides in the custody battle.  As a result, Elena Richardson begins to dig into Mia’s past – with dramatic consequences.

This book was a complete page turner for me, and kept me hooked from beginning to end. I listened to the audiobook version of Celeste Ng’s first novel, Everything I Never Told You, and it was just O.K. for me – I’m not sure if the audiobook version was just not as good, all the hype surrounding the first novel gave me too high of expectations, or if I was in the wrong mood for that style of writing, but whatever it was, I was unsure if I would enjoy this book. However, I now am in love with Celeste Ng after finishing this second novel of hers.  The clever puns and hints toward the final fire were delicious little teases, and the realistic character development kept me wanting to read late into the night.  Little Fires Everywhere had a great balance of humor, social critique, and drama. For my MARA project, I also found it a great description of Midwest life, particularly in the planned Shaker community found in Ohio.  I highly recommend!

“The Nix” by Nathan Hill

When I first read the front jacket of this book, I was sure I would despise it. A story about an obsessive video gamer, a 40-year old man bored with his life, and a former Vietnam protestor who abandoned her young child and husband? The synopsis basically sounds like my worst nightmare, PLUS its quite a hefty tome – it clocks in at over 600 pages. Thus, I avoided reading this book for months after I received it as a gift.

This ended up being a powerful lesson for me to never judge a book by its…well, maybe not cover, but first impression. Y’all, I absolutely ADORED this book, from page one.

I am hesitant to tell you too much about this novel, not only because it’s difficult to capture in a review – the story spans multiple states and even continents, several decades, and a wide cast of characters, though the central protagonists are Samuel Andresen-Andersen and his wayward mother. I am also wary of revealing too much of the storyline because that’s only a very small part as to why this book is so delicious, and I don’t want to risk ruining the delightful experience of reading this book for the very first time.

However, to give you a brief synopsis: Sam is a failing writer and jaded professor in Illinois, in financial troubles after failing (for over ten years) to deliver a manuscript after his big-time advance. He is struggling with the ghost of his mother Faye, who left him when he was a teenager, and his childhood love who is now a famous musician in NYC and engaged. He drowns his sorrows in hours upon hours of time on the computer game Elfscape (reminiscent of World of Warcraft).  One day he receives a phone call – his mother, who he hasn’t spoken to in decades, is in jail for supposedly attacking a political candidate, and needs his help.  Drama inevitably ensues.

However, this is only the surface-layer story. Within this overarching plot, like a Russian nesting doll, other stories are folded into this one. We hear of Faye’s curious childhood with her superstitious Norwegian father, who is convinced the family is cursed. We find out what happened to Sam’s childhood best friend. We are immersed in the 1968 Chicago Democratic National Convention riots, and the Vietnam War, and Occupy Wall Street. And woven into every page is subtle commentary on modern romance, academia, class divides, the arts, social media, the art of protest, religion…you name it, it’s there. Nathan Hill is certainly trying to be clever here in this novel, but instead of coming off pretentious, it simply had me infatuated.

I have read many wonderful books in my life. This is one of the best ones, hands down.  I can’t say this enough – PLEASE read it! I laughed out loud, I cried openly, I underlined a multitude of lines, I thought this story over for weeks after reading it. This one is magic, folks.

(P.S. read it before the movie comes out – Meryl Streep and J. J. Adams are teaming up for this one!).

Let’s catch up – what have y’all been reading lately? Can’t wait to hear about it in the comments below!