Although I’m not always a fan of literary trends, I do appreciate the insurgence of novels and stories about people dealing with mental health issues, whether directly or indirectly.  In the past, mental health issues in novels typically have been simplified as a character being merely “crazy,” (with a few exceptions, i.e. Under the Cuckoo’s Nest).  The past couple of years, however, have examined characters dealing with anxiety, depression, biploar disorder, etc with nuance and subtlety.  Writers have also been more open in discussing society’s perception of mental health and psychology, which is a completely separate and fascinating direction to take a story. I didn’t strategize this, but on my Mexican vacation last week I ended up reading three titles in a row that deal with mental health or society’s view of mental health.  Here’s the list:

The Vegetarian by Han King 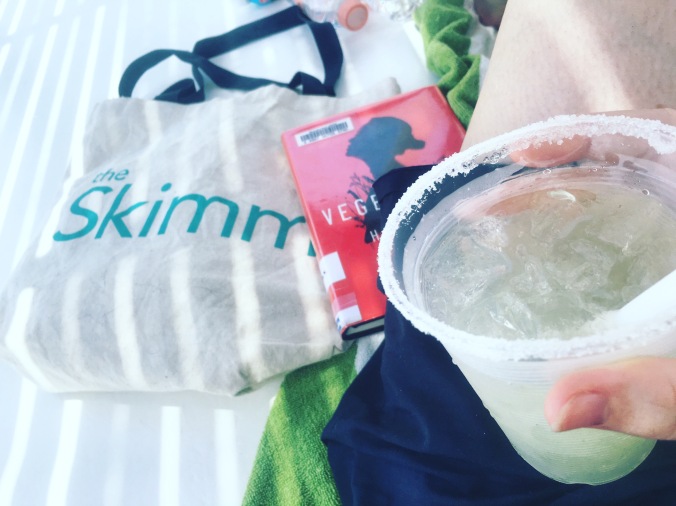 Books and booze on my Mexican vacation!

This book is small but packs a punch, and it has been ALL OVER the book blogging and publishing world for months now.  I’ve heard it referenced on Book Riot! podcasts, morning talk shows, and New York Times Book ads.  Oh yeah, and it won the Man Booker International Award, nbd.  So I had high expectations for this weird little novella.

It’s set in South Korea, and though the action centers from our protagonist, Yeong-hye, we never hear her own narrative voice.  Instead, it’s told from the perspectives of several members of her family, including her jerk husband and bemused sister.  Yeong-hye has always been a fairly passive and submissive wife; her husband describes their relationship as steady but lacking any sort of passion (or really, any true love).  He doesn’t have a very high opinion of her, but finds her “acceptable” for social purposes.  The story opens when Yeong-hye has a disturbing dream and decides she will no longer eat or cook meat, and all hell breaks loose.  Her husband is disgusted with her choice, her entire family is embarrassed and they believe she is certifiably insane for choosing a plant-based diet.

I can’t tell too much of the story without giving everything away (the books is too short to give too much of a description); however, it’s a fascinating and weird little story about the treatment and perception of those that are different (and possibly insane) in culture.  I do not know a lot about South Korean society, but I was told from a Korean friend of mine that his country highly values unity in thought.  Anyone who deviates from the conventional “norm” is really looked down on or seen almost as a threat (in his experience), and in South Korea meat is a vital part of their culinary culture, so the idea of a Korean vegetarian being deemed “insane” is not unheard of there. And honestly, that isn’t very surprising – even here in America we have a tendency to ostracize any “Otherness,” though typically not in so extreme a fashion.  So this idea of criminalizing differences is quite universal, and a fascinating aspect of the story.

This book is definitely on the artsy, weird side.  It isn’t my typical pick of a book, and it deals with some dark stuff.  So just be warned.  I personally enjoyed reading outside my comfort zone, but I will say it’s not your traditional novel.

I haven’t heard a lot of buzz for this new YA novel, but frankly I’m a bit surprised.  A teenage girl with a bit of a breakdown senior year, a father who’s trying to connect with his hormonal daughter, a summer trip to Eastern Europe? Sounds like a triple threat to me.  My high school self jumped at the prospect of reading this book when I noticed it in my local library.  Even the pale pink cover and chic watercolor portrait caters to the trendy reader. 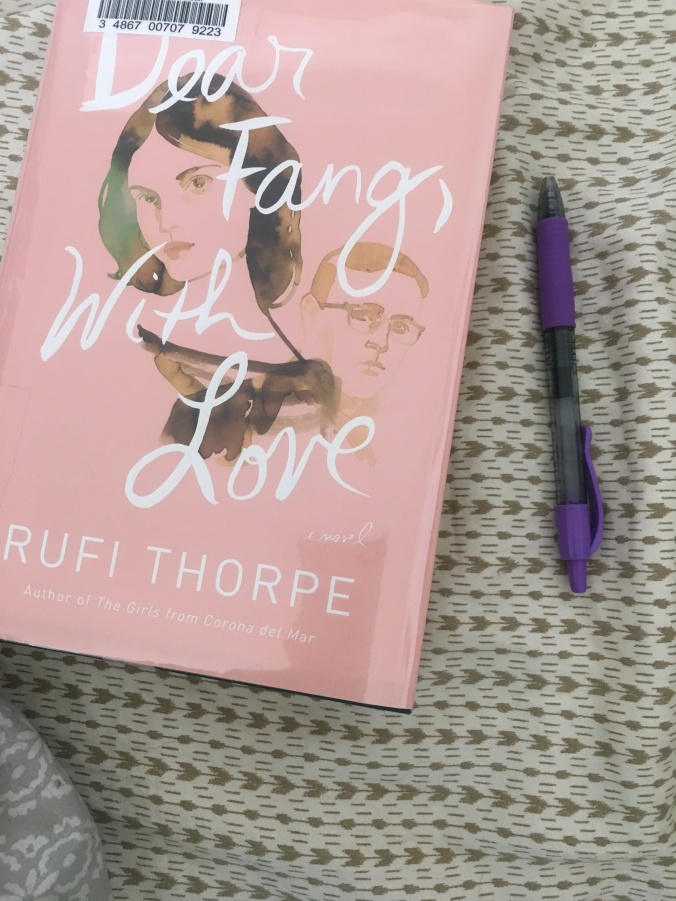 The story opens with 17-year-old Vera, a whip-smart and sassy teenager who has a bit of a breakdown during a party and is given a diagnosis by a psychiatrist.  Her parents, though not together, are both obviously concerned with their daughter’s emotional state and social well being.  When an opportunity for a summer trip to Lithuania is presented to Lucas, Vera’s father, he decides to sign both he and his daughter up to learn more about their family who lived in Lithuania during World War II. As the story unfolds, questions arise – what really sparked Vera’s outburst that night? Why did Vera’s parents split up? What happened to Lucas’ family in Lithuania?  There are also plenty of scenic descriptions of Eastern Europe, adventures in bars and museums, and email correspondence between Vera and her boyfriend, Fang (hence the title).

I thought this book was incredibly well done- it sparked a lot of questions about what it means to have a mental health disorder, the shortcomings of our current mental health care knowledge, the repercussions of a potentially incorrect diagnosis.  It also ponders the question of how to improve the quality of life of those dealing with mental health issues.  And again, it’s all told amongst the romance and beauty of Lithuanian countryside.  This was definitely a book that is in my more “usual” picks, and I thought it was a nicely executed YA book with plenty of meat to it.  At times the teenage angst got to me a bit; however, that probably just means the author was really good at encapsulating annoying teenage hormones.

Tender is the Night by F. Scott Fitzgerald 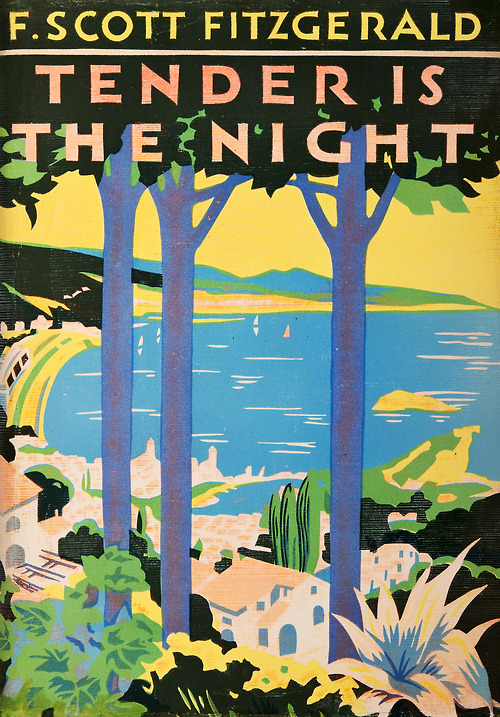 This is a book listed under my Classics Club selections, and obviously is not as “current” as my other two reads.  However, since it centered around a mentally unstable woman and her psychiatrist husband, it certainly fits into this category!

I’ve read several Fitzgerald novels and stories, but I usually appreciate rather than truly enjoy his writing…until I read Tender is the Night.  For some reason this story gripped me more than The Great Gatsby or The Beautiful and the Damned could. This was Fitzgerald’s last novel, so possibly his writing style had shifted to a more modern fashion.

Anyway, the story centers around a young starlet, Rosemary, and a married couple she meets in the French Riviera – Dick and Nicole Diver. Rosemary quickly develops an infatuation with the dapper Dr. Diver, and she questions the strange relationship between the married couple.  Turns out Dr. Diver is both husband and doctor to his own  trust-fund wife, who suffers under a mental disorder of questionable origins.  The novel is partially told in flashbacks to show how the Divers’ relationship evolved into marriage.  The other portion of the novel deals with their present-day relationship, burdened with Nicole’s strengthening neuroses, Dick’s burgeoning alcoholism, and their crumbling relationship.

The novel is a fascinating character study for several of the main characters, most especially Dr. Diver, and I had such mixed feelings about his personality – which made the story even more believable and nuanced.  Although the treatment of Nicole’s psychosis is fairly typical of the time this story was written, I thought the detailed descriptions of mental healthcare was highly nuanced in this story, and obviously Fitzgerald was knowledgeable of this topic as his wife was also diagnosed with a disorder, and both F. Scott and Zelda were considered possible alcoholics. My favorite novel of the three I read.

Now that I’ve talked about all the books I read on vacation, next I’ll talk about the trip itself! Stay tuned for the next posts about both Mexico and Prince Edward Island over the next few days :).

Do y’all have any other recommendations for books dealing with mental health issues or society’s perception of mental health? I would love to know! Comment below :).

One thought on “Matters of the Mind (Reviews)”