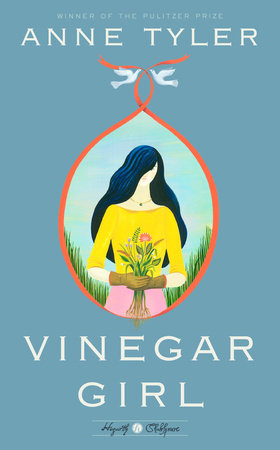 I have a love-hate relationship with adaptations.  Some turn into raving successes – i.e. Alicia Silverstone bringing Emma back to life in her movie “Clueluess.” Or Bridget Jones’ Diary for Pride and Prejudice re-vamped. Others are head-shaking failures or downright gross…did we really need a re-make of Twilight, especially one with erotica in it? (I’m looking at you, 50 Shades of Grey).  So when publishers announced a series of Shakespeare literary adaptaions, I was wary but intrigued, especially when I heard the likes of Jeanette Winterson and Anne Tyler were on board.  Then NetGalley passed Vinegar Girl my way and I was able to take a peek. Thank you to them for the e-galley in exchange for an honest review!

Anne Tyler is beloved amongst the literati, and for good reason.  She’s won a Pulitzer (it’s nbd), written 20 novels, and has been compared to John Updike and Eudora Welty.  She’s known for focusing on details of everyday lives, particularly the in’s and out’s of marriage, and most of her books have been commercial and critical successes.

…and cough, this is the first book I’ve read by her, cough.  I know. I KNOW. Don’t worry, I am properly embarrassed by my lack of taste.

Hmph.  Moving on. Anyway, this book is an adaptaion of Shakespeare’s “Taming of the Shrew.”  I think the title is a clever nod to the original, don’t you?  The novel centers around Kate Battista, a 29-year-old intelligent college drop-out who works as a teacher’s aide and lives with her father and her much younger sister, Bunny.  Kate’s personality does not consist of warm fuzzies – she is brusque, blunt, and borderline bitchy.  However, the kids she aides actually love her honesty and, though her boss doesn’t appreciate her lack of tact, seems to have an affinity to child-care. Kate is also a bit of a hermit and has no current prospects for marriage or career advancement.

Kate’s father is a researcher who is obsessed with efficiency and relies on Kate to manage the taxes, household work, and rearing of his younger daughter, who’s a bit of an airhead.  Like Kate, Dr. Battista is not one for social graces or sentimentality.  So, when his research assistant, the Russian Pyotr, is desperate to get his green card for the US, Dr. Battista assumes he can get his daughter to marry him!  And chaos ensues.

This book just came out, so it’s early for awards, but come on.  It’s Anne Tyler.

The storyline, at first glance, seems a bit silly, but then I remember that I thought the storyline of Taming of The Shrew was also a bit silly and I got over it.  Anne Tyler writes in such a frank, straight-forward style, but it doesn’t feel superficial or dumbed down.  I would find myself getting caught up in the story without meaning to – I would originally sit down for a quick ten minute reading break from housework, and 30 minutes later would still be turning the pages on my Kindle. The book was also a short read in addition to being entertaining, so I ended up finishing it in an afternoon.

I thought the way Tyler handled the story was fairly clever; instead of making Kate an unrealistic witch she had her soft spots and her weaknesses.  It also made way for character development – even though at first Dr. Battista seemed like an arrogant prick, by half-way through the novel I started to sympathize with his situation.  He began to appear less like a douche and more like a mere absent-minded professor.  Tyler did a good job at making the reader shift perspectives and opinions on the different characters, giving them more depth than at first glance.

I still feel like the story was a little too simple and “normal” for my taste, but that’s mostly because my go-to novels are more dramatic anyway.  This was a well-crafted story. I’ve read in some other reviews that this is not Anne Tyler at her best, so I’m interested in reading other novels by this writer to see how amazing she really is.

A book I had trouble putting down? A storyline that was accessible but witty? A comedy of manners? check check check. a couple of misses with the overly-simple storyline and some auxilary characters who landed a bit flat.

Any suggestions on what Anne Tyler book to start with? Thanks in advance!